Offenders are brought to justice and are less likely to re-offend.

Tackling and investigating crime is a core policing role. Agencies involved in dealing with offenders also need to work together to prevent crime in the first place, and make people less likely to reoffend, so there are less victims in the future.

In order to ensure offenders are brought to justice whilst also supporting people from re-offending, the Commissioner’s Police and Crime Plan includes the following objectives:

Tackling and investigating crime so that offenders are brought to justice, while ensuring the best outcome for victims, is a core policing role. This also includes acting early to steer someone away from reoffending. The Commissioner holds the Chief Constable to account for the performance of the Constabulary.

Demand on policing remains high. The infographic below will explain a typical day in Cambridgeshire. 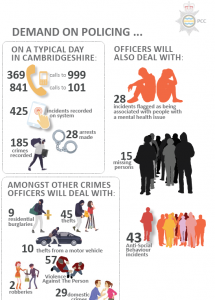 Police and Crime Commissioners are responsible for commissioning restorative justice services from the grant they receive from the Ministry of Justice for Victims’ Services. Restorative Justice (RJ) is a process which empowers victims by letting them have their say and helping them to move on with their lives. It can also help offenders to recognise the impact of what they have done and make amends. The process is completely voluntary for both parties and is done at a time that is right for the victim. More details about how to access Restorative Justice in Cambridgeshire can be found here.

All agencies coming into contact with offenders ensure they address the causes of criminality.

The Commissioner recognises the complex causes of crime must be addressed to make people less likely to reoffend, so that there are less victims in the future. Partnership working is key to address the causes of offending in order to break the cycle of crime.. The Commissioner chairs the Criminal Justice Board and the Countywide Community Safety Strategic Board to ensure a co-ordinated multi-agency response.

A needs assessment  highlighted the scale of complex needs to be addressed. Key issues include housing, mental health, substance misuse and employment. Government plans to reform probation services are scheduled to be implemented from June 2021.

A partnership approach will be taken that protects local communities from crime and manages the most complex offenders.

The Commissioner awards around £1.3m of grants to organisations to contribute to crime and disorder reduction. Along with the Commissioner’s Youth and Community Fund, it also supports preventative and early intervention approaches for young people and adults.

You can read more about the range of work undertaken to tackle crime and disorder issues here.